I have had a hard time researching my third great-grandfather because his name has been spelled many different ways: Chaywood, Kaywood, Raywood, Leawood, Chawood, Taywood, Cawood, and Charwood.

Caywood Davis was born September 6, 1856 in Illinois.  He was the son of William Cors Davis and his second wife, Mary "Polly" Nicholson.  Caywood had a younger brother, Warner, and an older sister, Sarah, along with six older half siblings. 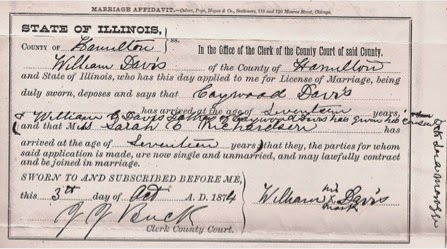 Caywood married Sarah Richardson on October 4, 1874 in McLeansboro, Illinois.  They were both seventeen so they had to have consent from Caywood's father on the marriage certificate.

Caywood was a farmer for at least 20 years.  In 1880, the family lived on a farm in McLeansboro.  Their neighbors included Caywood's brother, Warner, and two of Sarah's sisters, Mary Ann and Lorinda Jane.  By 1910, Caywood had stopped farming and worked as a janitor at a church.  The Davises relocated to Vincennes, Indiana by 1920, and Caywood began a furniture business with his oldest son, Milton.


Sometime before 1930, Caywood and Sarah moved to Connersville, Indiana -- maybe because two of their children were living there.  Their daughter, Mrs. Belle Mount, had been living in Connersville since 1920 and ran her own salon, "La Belle Beauty Shop".  Their son, Paris, lived with Belle's family.  He later lived with Caywood and Sarah and was employed as a printer.  Caywood worked as a janitor at the Central State Bank.  He also was an employee at the Spicely Drug Store.  Caywood and his wife were members of the Grand Avenue Methodist Church in Connersville.

On April 9, 1947, following a long illness, Caywood Davis died.  His wife died ten days later.  They had celebrated their 72nd wedding anniversary the year before.
Posted by Brenna G.

Why I Started This Blog

I started this blog because I am interested in genealogy and feel the need to preserve my family's stories. The name of the blog comes from my grandma. In her file cabinet, she had several folders labeled "Green Family Archives." These folders contained pictures, greeting cards, newspaper clippings, event programs, etc. Whenever she had something of sentimental value or importance, she stashed it in the "Green Family Archives."