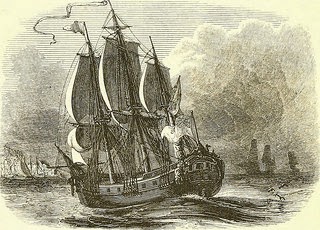 Mary Ann Hill was born aboard a ship on passage from Ireland to America on June 6, 1790.  This is confirmed by 1880 census reports from four of her children.  Her birth at sea is also mentioned in a biographical sketch of her son, James Whitlow Trees. (The sketch is from the History of Rush County, Part II.)

Like many Irish immigrants of that period, Mary Ann's parents, John Hill and Elizabeth Jane Whitlow, came from Ulster.  John Hill was a weaver in trade.

After the Hills arrived in America, they located somewhere in Pennsylvania.  I don't know exactly when they left that state, but Mary Ann spent most of her early years in Bracken County, Kentucky.

In 1811, Mary Ann married another first-generation American, John Adam Trees, in Clermont County, Ohio.  After spending well over 10 years in Clermont County, Adam and Mary Ann decided to move to Indiana.  For 10 days, they traveled over almost impassable roads, crossing the White and Miami Rivers. Their youngest child, John Kell Trees, was barely two months old at the time. The family arrived in Richland Township, Rush County, Indiana on March 27, 1823. The Trees raised ten children, who all lived to adulthood.

Mary Ann Trees died on July 23, 1863 in Shelby County, Indiana, less than a year after the death of her husband.  She was 73 years old.  Her father, John Hill, outlived her by a few years.

Why I Started This Blog

I started this blog because I am interested in genealogy and feel the need to preserve my family's stories. The name of the blog comes from my grandma. In her file cabinet, she had several folders labeled "Green Family Archives." These folders contained pictures, greeting cards, newspaper clippings, event programs, etc. Whenever she had something of sentimental value or importance, she stashed it in the "Green Family Archives."